My hero and mentor

Last month, I attended a royal garden party at Buckingham Palace in recognition of our work. As I was patiently waiting in line, a thought crossed my mind: “Richard would have loved this”. He would most likely say that he predicted it. I am not sure I would have myself, but Richard was one of my greatest mentors. He was the first person outside of my family that enthused me about helping other people across the globe.

In the early 1990s, my dad, as he usually did, brought home an intriguing and very interesting dinner guest. It was Richard. The two had met in a church in Shrewsbury, while Richard was in the UK to study pig farming, something he intended to get into when he went back to Sierra Leone.

My first impression of him was that he was super cool. He was so relaxed, especially for someone that had informed me that he was soon returning to an actual warzone. At one point in time, he was living in Liberia as a refugee. But I never heard him complain about hardships and, no matter how bad things got, he never lost his cool. He had a great sense of humour and loved winding people up. He once convinced me that he couldn’t drive, only for me to witness him just half an hour later doing donuts in a car park.

Richard was the definition of a natural leader, someone that people easily follow. He was inspiring for his actions, his bravery, his sacrifice, and his interest in other people. I knew Richard not only cared for me, but also that he had a vision for me. He believed in me from an early age, but he was very subtle in encouraging me to help other people help themselves. He was especially useful in the youth work in which I was involved. He gave his life to young people and he inspired me to greatness. He demonstrated behaviours that I still consciously seek to replicate today.

On July 18 2022, it’s Black Leaders Awareness Day. This is a day to introduce Black leaders to the world and celebrate their accomplishments. I would like to share my memories about a man who I think was the definition of a Black leader—my hero and mentor, Richard Cole.

In 1992, shortly after the civil war broke out in Sierra Leone, Richard was moved by the plight of young people and children. He decided he had to do something about it. The young victims of this violent conflict had witnessed horrific atrocities, lost their families, were kidnapped, abused and forced to become child soldiers. Richard founded the Lifeline Nehemiah Project to save as many young people and children as he could.

He went behind rebel lines and negotiated the release of many child soldiers into his care. Richard, or ‘Pa Cole’ as they called him, quickly became a father to many saved children. He sheltered a lot of the young people and children in his own home.

The Sierra Leonian government quickly acknowledged Richard’s work and provided bigger accommodation for his project. But he was not satisfied with just meeting the most basic needs. Instead, he set about rehabilitating and seeing to the educational needs of the boys, insisting they attend school or vocational training.

In his heart, he passionately believed that the boys he had adopted into his family—those who many thought could never have a future—would one day rebuild Sierra Leone.

Both during the war and after, Richard would often come and stay in my family home as a cherished guest. He would tell us the stories of his latest exploits in snippets, the pain of the memories weighing hard on him. As a boy and a young man, he was a modern-day hero not only to me but to many others. 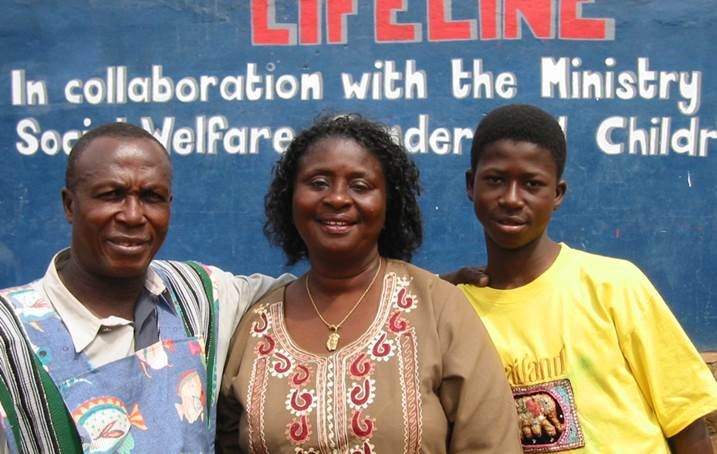 As a community, we invested in Richard’s work in Sierra Leone and became inspired to follow his example, which led us to begin LifeLine Projects here in the UK.

More than fighting rebels, freeing child soldiers, or feeding a multitude of mouths, what truly made Richard a hero to me was that he gave me time. Once, when he came to the UK to recuperate from the war—a time when it was too unsafe to stay in Sierra Leone—he would follow me around. Tagging along wherever I went, he came with me to the gym, he came with me as I mentored young people, and he came with me when I met my mates down the pub. To this day, I still do not know why he went to such lengths. But it demonstrated to me the extent that he cared about me. I remember the time I was in Zimbabwe, as part of a team doing international development work. I got a fax at my hotel from Richard, sent while on the run from the rebels in Sierra Leone. I still have that fax today; it is a treasured memento.

He was an honoured guest at my wedding, he was so happy. Sadly 18 months later, he passed away. He left a huge hole in my life—such a brilliant man with an inspiring legacy. That is what I continuously strive to live up to.

Chief Executive Officer
Nathan is passionate about improving the lives of young people and their families. Nathan draws from the African proverb, “It takes a village to raise a child.” He believes community is the component that is missing in the modern western society and the key component that would benefit young people. Nathan believes we are there, not just to help others but to support them to become agents of change within their communities.
All posts by Nathan Singleton 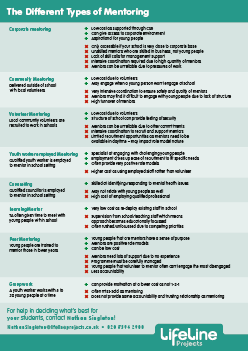 Get our e-bulletin straight to your inbox each month.

Plus we'll send you our simple one-page guide to different types of mentoring as a thanks for signing up!
Like most websites, LifeLine Projects uses cookies. In order to deliver a personalised experience, we remember and store information about how you use the website.
By using our website, you accept our use of cookies.OKOur Privacy Policy